Bhagavad-Gita is a collection of teachings of Lord Krishna to his disciple Arjuna. The essence of the philosophy as contained in the Gita is with inner convictions. We should discharge our duties diligently and honestly irrespective of the consequence and leave the rest to Almighty. We must fight for justice and right cause. Holy Gita is also called the Gospel of Humanity or Song Celestial. Its teachings are well known; Do your Duty. Do not expect any fruit. Duty itself is a reward in itself. It is Action which is important and only action will take you to salvation. And fight the evil. ‘Karma’ is supreme.

Meaning of education (Vidya): Education is the process of performing one’s own duties for the attainment of peace, joy, satisfaction and salvation being rid of the three wraths (lust, anger and fear) with the steady mind and wisdom. Education is the process of cultivating completeness in human being. That implies knowledge, skill, ability and wisdom for Karmic and Dharmik life. When a human is free from the three wraths (lust, anger and fear), is the state of attainment of knowledge and wisdom. Education on salvation, education on action and education on wisdom are the more relevant aspects of the Bhagavad-Gita. 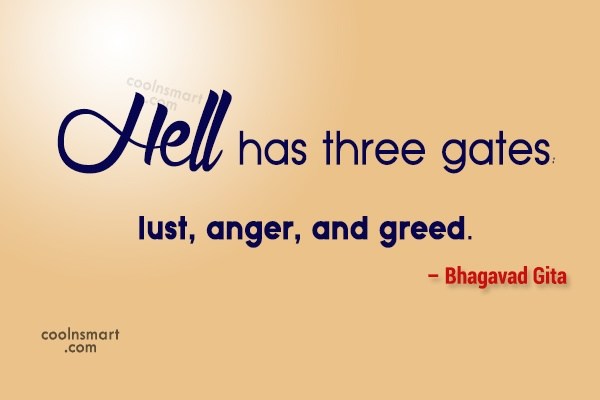 Develop and effect sublimation of personality: Everyone’s personality is equipped with evil (Asuri) and virtuous (Daivi-godly) traits. In other words, Kauravas (Asuri) and Pandavas (the virtuous) exist in each of us. Krishna awakens in Arjun the virtuous powers inherent in him and motivates him towards the right path. This is exactly what a Guru should do for his disciple. Thus the ideal of education should be to develop and sublimate the personality of the student.

Develop the inner consciousness: Arjun desires to keep himself away from the ghastly battlefield. Krishna does not want to force him against his will. Instead, he (Krishna) takes recourse to logical reasoning’s and tries to convince Arjun about his sacred self- duty (Swadharma). Ultimately, on his own, Arjun decides to fight against his opponents. Thus Krishna, his Guru and Friend, succeeds in awakening the inner consciousness (Anthahakaran). This is exactly the ideal that we should follow in the field of education. Steady wisdom: The Bhagavad-Gita states that the state of steady wisdom is such a state when achievement and failure, profit and loss, joy and sorrow can be perceived in equal terms, that is a state of the fullest satisfaction or the end state of desires.

Enabling the individual to react: Education makes human Dharmik thereby developing capacity to raise voice against injustice of any sort, involve in welfare of living beings, be impartial to truth and discern between what is human and what is inhuman.